Code for the project presentation:

I left the OpenBSD as a laptop project and installed FreeBSD instead.

The main thing that made me install FreeBSD instead of keep using OpenBSD is that i couldn’t use Matlab (this is used in my education) and Mplabx (which I use for programming PIC ciruits).

I installed virtualbox and installed ubuntu, and from there i installed both Mplabx and matlab with success.

If bhyve will come to OpenBSD, perhaps i can use USB passthrough and install a Linux machine from there and use X forwarding.

Im trying to get OpenBSD running as a laptop but there are some problems that i came across. The first one is OpenBSD x64 cannot run linux compability mode which makes it alot harder to use MatLab. Im thinking of running in under QEMU but i think that it will have worse performance though.

To compile projects with Arduino works good, its console based but i dont care about that. I will check if there is any possibility to use geany as an IDE for arduino.

I also want to be able to program microcontrollers, specificly the microchip controllers. I have bought an PICKIT3 and im trying to make it work under OpenBSD now. I noticed that QEMU does not support USB passthrough, that makes it alot harder to make it work though.

Lets see where it goes! 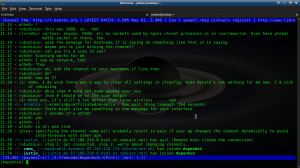 I have sucessfully merged those two patches to work with openbsd 5.5 current. Thanks to jcs who made the original patch for the x201 laptop. and thanks for the patch from jjjesss who made that apmd patch.

My customized patches can be found here:

END_OF_DOCUMENT_TOKEN_TO_BE_REPLACED

This may be a good place to introduce yourself and your site or include some credits.